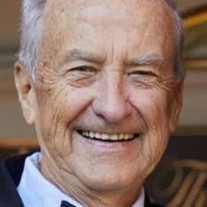 Charles R. “Chuck” Stamford, 89, of The Villages, FL, formerly of North Huntingdon, died Saturday January 25, 2020. He was born December 5, 1930 in Turtle Creek, a son of the late Richard and Myrtle Stamford and was also preceded in death by his wife Janet K. (Miller) Stamford and a sister Sandra Close. Chuck earned an associate degree from Robert Morris University and was an assistant controller for Kauffman’s Department Stores. He was an army veteran of the Korean Conflict. He was a member of New Covenant United Methodist Church, in Florida and a former member of First United Methodist Church, Irwin. He was a member of Shidle Lodge, No. 601, Free & Accepted Masons and was a member of the Bromas golf and bowling leagues. He enjoyed living at The Villages and until recently golfed three times a week. He is survived by his loving companion Jan Gill; his children Janet (John) Harper of NY, NY, Laura (James) Rodgers of Clarkston, MI, and Charles (Stephanie) Stamford of Orlando, FL; his grandchildren Alexandra (Charles) Craigle, Brynn (John) Loboda, Brittany (Brett) Nickoli, Matthew Rodgers, Luke Rodgers, and Rachel, Sydney, and Charles Stamford; his great granddaughter Nora Nickoli; siblings Donna Long, Don Stamford, and Thomas Stamford; also nieces and nephews including niece Katie (Hugh) Fawcett. Friends will be received from 6 to 8 p.m. Friday at the William Snyder Funeral Home, 521 Main Street, Irwin, where a funeral service will be held at 11 a.m. Saturday with Rev. Bruce Judy, officiating. Interment will follow in Grandview Cemetery. A masonic funeral service will be held at 7:30 p.m. Friday in the funeral home. In lieu of flowers a contribution can be made to the Leukemia & Lymphoma Society at www.lls.org. For online condolences please visit www.snyderfuneralservices.com.

The family of Charles R."Chuck" Stamford created this Life Tributes page to make it easy to share your memories.

Send flowers to the Stamford family.