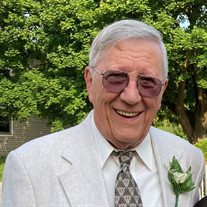 Carl Miles Shirey, 84, of North Huntingdon peacefully went to meet his Lord and Savior on Tuesday, January 4, 2022. His final days on this earth were spent surrounded by his family. We are sure he is being greeted in Heaven with open arms and more love than we can imagine. He was born on December 10, 1937 in Mayport, the loving son of the late Katherine (Gruver) and Oren Shirey. He was married for 61 years to Elaine (West) Shirey, who preceded him in death on February 11, 2017. Carl is also preceded in death by his sister, Ruby Dinger of Punxsutawney. Carl was a devoted follower of Christ. He shared his God-given gifts of helpfulness, and attention to detail with many churches throughout the North Huntingdon area. One of his many sayings being, “You need to take care of God’s House.” His construction talents were impeccable. You cannot look at the Pittsburgh skyline without seeing Carl’s masterful work in the views. He was employed at Local Carpenters Union 230 for 60 years. Carl’s family and friends will remember him as a devoted partner and loving caregiver to his wife Elaine, and a man who loved his family, and friends with a true servant’s heart. He was a member of the New Hope Presbyterian Church in North Huntingdon and was active with the Men’s Prayer Fellowship in the community. He was also a member of the Shidle Lodge 601 F&AM in Irwin. He is survived by his three children, Kevin (Debbie) Shirey of North Huntingdon, Lisa (Glenn) Good of Punxsutawney, and Diane (Bill) Lichauer of Pittsburgh, six grandchildren, Kevin Shirey (Stacey), Justin Shirey, Heather Good (Jill), Jacob Good, Will Lichauer, and Hannah Lichauer; one great granddaughter, Lilly Shirey and one great grandson due in April; one sister, Lois Pence; and his companion and best friend, Karen Benevento. Friends will be received from 6 to 8 p.m. Thursday at William Snyder Funeral Home, 521 Main St., Irwin, 724-863-1200. Visitation will continue on Friday at the New Hope Presbyterian Church, 12727 Lincoln Way, North Huntingdon from 10 a.m. till the time of the funeral service at 11 a.m. with Pastor Brenda Barnes officiating. Private Interment will be at Brush Creek Cemetery in Irwin. In Lieu of flowers, memorial contributions can be made to the New Hope Presbyterian Church in North Huntingdon. For online condolences please visit www.snyderfuneralservices.com.

Carl Miles Shirey, 84, of North Huntingdon peacefully went to meet his Lord and Savior on Tuesday, January 4, 2022. His final days on this earth were spent surrounded by his family. We are sure he is being greeted in Heaven with open arms and... View Obituary & Service Information

The family of Carl Miles Shirey created this Life Tributes page to make it easy to share your memories.

Send flowers to the Shirey family.