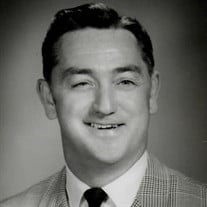 Carl Dean Davis Sr., "Coach" 85, of Greensburg, formerly of Irwin, died Tuesday April 16, 2019. He was born December 1, 1933 in Irwin, a son of the late Reginald and Mary Etta (Murray) Davis and was also preceded in death by two daughters Lisa Howell and Dr. Wendy Dar and a brother Rhoslyn J. Davis. He was a graduate of Irwin High School, Class of 1951, and served in the Army during the Korean Conflict "Singing his way through". He received his bachelor’s degree from Tarkio College, Tarkio, MO, his master’s degree from the University of Pittsburgh, and did graduate work at Penn State University. He was a professor for the Health & Education Department at Indiana University of Pennsylvania where he coached basketball for 14 years, 13 of those years as head coach. He had also coached baseball at IUP for 3 years and also was head basketball coach at Jeannette High School from the late 50’s thru the 60”s. Carl was an Inductee to the Indiana County Sports Hall of Fame, IUP Athletic Hall of Fame, Tarkio College Hall of Fame as well as Norwin High School Hall of Fame. He was a member of the Church of the Brethren of Greensburg, the Koninia Karolers, and a former member of the Irwin Male Chorus for many years. He also was a member of the Westmoreland County Coaches Association, the Alwine Civic Center, and Shidle Lodge 601, F. &A.M., Irwin. He enjoyed fishing, hunting, and spending time at camp. He was a family man and enjoyed spending time with his grandchildren. He is survived by his wife of nearly 60 years Joan (Anderson) Davis; his sons Carl D. Davis Jr. and his wife Stephanie and Eric Davis and his wife Brenda of Greensburg; 8 grandchildren; a brother Reginald Davis and his wife Nadine of Irwin; also nieces and nephews. Friends will be received from 2 to 4 and 6 to 8 p.m. Tuesday April 23, at the William Snyder Funeral Home, 521 Main Street, Irwin, 724-863-1200, where a funeral service will be held at 11 a.m. Wednesday with Rev. Harrison Smith, officiating. Interment will follow in Union Cemetery. In lieu of flowers a contribution can be made to the Church of the Brethren of Greensburg, 554 Stanton St., Greensburg, PA 15601. For online condolences please visit www.snyderfuneralservices.com.

The family of Carl "Coach" Dean Davis Sr. created this Life Tributes page to make it easy to share your memories.

Send flowers to the Davis family.