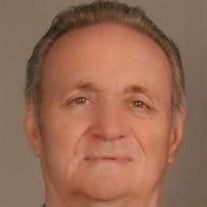 C. Gary Dinsel, 76, of North Huntingdon, passed away Friday March 27, 2020 at UPMC Shadyside Hospital as a result of complications from open heart surgery. He was born October 14, 1943 in Altoona, PA, a son of the late Charles A. and Ruth M. (Burger) Dinsel. Gary was a graduate of the University of Pittsburgh earning a bachelor’s degree in accounting and was a licensed CPA. He formerly owned Extrude Hone Corporation, North Huntingdon, and was a partner/owner of Greensburg Country Club. He also had served in the Army Reserves as a field medic for several years. He was a very active member of Circleville United Methodist Church, where he served on the pastoral counsel and finance committee, having been a past chairman of both groups. He was also a longtime active member and past president of Norwin Rotary, a former board member of the Norwin Area Chamber of Commerce, a member of the Pitt Alumni Association, and a member of the Workforce Investment Board Westmoreland/Fayette County Economic Growth Connection. Throughout the years of serving on these boards he was the recipient of numerous awards including but not limited to the 1998 WEDC Businessperson of The Year, and the Outstanding Citizen Award presented by the Norwin Rotary Club in 2004. Gary was an extremely active member in the business community whose goal was to bring industry, education, and new business to the people of Westmoreland County and the surrounding areas. His joys in life were being with his family, traveling, fishing, golfing, hitting the casino, and exercising his green thumb in his beautiful gardens. He also was a self-proclaimed wine sommelier who loved to catch the Steelers and Pitt football games on Sundays. He is survived by his wife of 54 years Barbara L. (Ketenheim) Dinsel; daughters Lynette A. Christian of East Pittsburgh and Diana L. (Michael) Snyder of Manor; his grandchildren Rochelle (Robert) Pollard, Nicole Anderson, Cierra Christian, Bria Christian, and Hayden Snyder; his great grandchildren Amaiya Dinsel and Collens Pollard along with his beloved dog, Bella. In addition to his parents, he was proceeded in death by his brother Lee F. Dinsel. The family would like to thank Gary’s nurses, Shermie & Mark for his wonderful care. A private family viewing and funeral service will be held at the William Snyder Funeral Home, 521 Main Street, Irwin, with entombment following in Twin Valley Memorial Park, Delmont. A public memorial service will be held at a later date. In lieu of flowers, the family suggests that memorial contributions be made to Circleville United Methodist Church at 11600 Parkway Dr. North Huntingdon, PA 15642. For online condolences please visit www.snyderfuneralservices.com.

C. Gary Dinsel, 76, of North Huntingdon, passed away Friday March 27, 2020 at UPMC Shadyside Hospital as a result of complications from open heart surgery. He was born October 14, 1943 in Altoona, PA, a son of the late Charles A. and Ruth M.... View Obituary & Service Information

The family of C. Gary Dinsel created this Life Tributes page to make it easy to share your memories.

Send flowers to the Dinsel family.