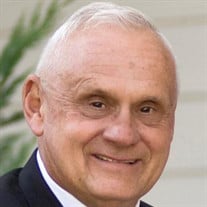 Byron G. Wardropper, 75, of North Huntingdon, died unexpectedly June 29, 2021. He was born April 16, 1946 in McKeesport, a son to the late Harry James and Edna Samantha (Littleton) Wardropper and was also preceded in death by his brothers Tom and Gerald Wardropper and his brother in law Colin Hemus. He was the CEO and founder of Innovative Carbide in Irwin. He spent over 57 years in the tungsten carbide industry and started his own business in 1987. He also owned IC Recycling Solutions in Irwin, and Action Roof Tile Tooling in Lake Wales, FL. His legacy will live on through his wife and children. Byron had a love for aviation and was known as “El Lobo'' among his pilot friends. He was a member of the Experimental Aircraft Association, Aircraft Owners and Pilot Association, and Cirrus Owners and Pilot Association. He was also an avid outdoorsman and life member of the National Rifle Association and a member of the McKeesport Gun Club. He is survived by his wife of 42 years Bethany (Kittiko) Wardropper; his son Joel (Tiffany) Wardropper of Penn Township; his daughter Heather (Stephen) Peck of Unity Township; his grandchildren Blake Branthoover, Liam Peck, and Lainey and Taylor Wardropper; brother James (Norma) Wardropper of Dravosburg; sister Veronica Hemus of Belle Vernon; sister in law Linda Wardropper of Elizabeth Township; his mother and father in law Ben and Vivian Kittiko of North Huntingdon; brother in law Paul (Winnie) Kittiko of Douglasville, GA; as well as many nieces and nephews. Friends will be received from 6 to 8 p.m. Tuesday and 2 to 4 and 6 to 8 p.m. Wednesday at the William Snyder Funeral Home, 521 Main Street, Irwin, 724-863-1200, where a funeral service will be held at 11 a.m. Thursday. Interment will follow in Round Hill Cemetery, Elizabeth. In lieu of flowers a contribution can be made to the Red Tail Project at cafriseabove.org or The Wasps at waspmuseum.org. For online condolences please visit www.snyderfuneralservices.com.

Byron G. Wardropper, 75, of North Huntingdon, died unexpectedly June 29, 2021. He was born April 16, 1946 in McKeesport, a son to the late Harry James and Edna Samantha (Littleton) Wardropper and was also preceded in death by his brothers Tom... View Obituary & Service Information

The family of Byron G. Wardropper created this Life Tributes page to make it easy to share your memories.

Send flowers to the Wardropper family.