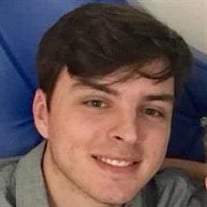 Brian Lawrence Hetrick, 21, of North Huntingdon died at home on July 16, 2019. He was born February 28, 1998 in Greensburg, the loving son of Warren Hetrick and Marina Venturelli. In 2002, Brian became the older brother to his surviving sibling, Alex Hetrick. Brian was a 2016 graduate of Norwin High School. He was about to begin his Senior year at University of Pittsburgh, Greensburg, where he was a Dean’s List student after transferring from WCCC in 2018. He also worked at Kohl’s, North Huntingdon for the past few years. Brian was a good kid. He didn’t do drugs, never got into trouble, and hardly drank. He went to pre-school at Calvary Preschool Center, attended first grade at West Hempfield Elementary before transferring to Sunset Valley Elementary, and continued his high school career at Norwin School District. He received First Communion and Confirmation at St. Agnes Church. He played soccer for many years at the Norwin Soccer Club, playing for coach Seth’s Travel Team, and later for the 9th Grade High School Team. He went on to play for WCCC his freshman year in college. He also participated in martial arts, T-ball, baseball, basketball and track growing up. Brian spoke Italian, and he loved travelling to Italy to visit his Nonni, and especially adored being with his two young cousins there, who took to him so much. He also enjoyed beach vacations growing up, and being with his good friends Marc, Cayden, Cam, Kevin, and many other special friends from all parts of his life. In addition to his parents and his brother, Brian is survived by his maternal grandparents Pietro and Olimpia (Casolari) Venturelli of Bergamo, Italy; Uncle and Aunt Luca and Cristina Venturelli and young cousins Lucrezia and Greta also of Bergamo, Italy; Uncle and Aunt Ronald and Ellen (Stetzer) Hetrick from Bremerton, WA., and older cousin Eli Hetrick from Seattle WA. Special Godparents (Uncle and Aunt to Brian) Mike and Carolyn Backus, who loved Brian like their own. Friends and family will be received from 6 to 8 p.m. Friday and 12:30 to 2 p.m. Saturday at the William Snyder Funeral Home, 521 Main Street, Irwin, 724-863-1200. A private Blessing service will be held Saturday after the public visiting hours. In lieu of flowers, donations may be made to American Foundation for Suicide Prevention https://afsp.org. For online condolences please visit www.snyderfuneralservices.com.

Brian Lawrence Hetrick, 21, of North Huntingdon died at home on July 16, 2019. He was born February 28, 1998 in Greensburg, the loving son of Warren Hetrick and Marina Venturelli. In 2002, Brian became the older brother to his surviving sibling,... View Obituary & Service Information

The family of Brian Lawrence Hetrick created this Life Tributes page to make it easy to share your memories.

Send flowers to the Hetrick family.