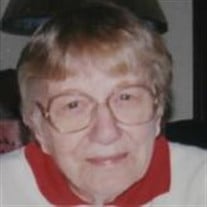 Blanche Shirley Henry, 87, of Jeannette, died Saturday March 31, 2018. She was born October 10, 1930 in Latrobe, a daughter of the late Charles and Sarah (Bates) McCauley and was also preceded in death by her husband Hubert “Hugo” Henry in 1987. Shirley worked at Urbani's Pharmacy in Jeannette for many years, then for Rite Aid until she retired at the age of 83. She enjoyed trips with her bus group, knitting, crocheting, gardening, quilting, and was an avid fan of the Pirates, Steelers, and especially the Penguins. She also volunteered many thousands of hours at Jeannette Hospital, starting with micro filming back in the early 70's to managing the gift shop and locking the door for the last time before the hospital was demolished which was a very sad day for her. She is survived by her children Nancy (Charles) Pekar of Irwin, Rebecca Henry of Greensburg, and Rachel Henry and Leon Henry both of Jeannette; her grandchildren Candice Henry of Jeannette, Michelle ( Joseph ) Minkel of Cranberry and Jennifer ( Stephen ) Kelly of North Huntingdon; and great grandson, Noah Kelly, of North Huntingdon. The family would like to extend their sincerest appreciation to the nurses and staff at Transitions Healthcare for the loving care that was provided to Blanche. They not only look after the patient’s needs, but for the family as well. There will be no public viewing. Private interment will be in Jeannette Memorial Park. The William Snyder Funeral Home, Irwin, is in charge of arrangements. For online condolences please visit snyderfuneralservices.com

The family of Blanche Shirley Henry created this Life Tributes page to make it easy to share your memories.

Send flowers to the Henry family.