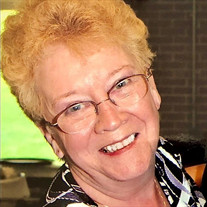 Anne Staub-Withers, 84, passed away peacefully on November 15, 2020, at UPMC Mercy Hospital in Pittsburgh surrounded by her loving family, just in time to enjoy a vodka and coke for "cocktail hour" in Heaven. The great story of Anne's life began on August 27, 1936, in the small bonnie village of Bridge of Weir, Scotland, where she was born to mother Mary Gallacher (Stewart) and father James Gallacher. Her strength was seeded early starting with the conflict of World War II. Anne -- along with older brother Edward, older sister Catherine and younger sister Margaret -- slept together every night readied in boots and with their Mickey Mouse gas masks by their pillows in preparation of an incoming air raid. Fortunately, Anne’s immediate family did not suffer losses in the war, but the experiences left long lasting effects on her and her community. As a young woman in a staunch Catholic family, Anne was given little choice when she became unexpectedly pregnant at sixteen with her first love, Andrew Mitchell, a Protestant. Although the young couple planned to run away together to raise their child, the family placed Anne into a nunnery in Glasgow, where she would birth her daughter by herself and without the support of her family. Refusing to let her return home after causing such shame, her parents, unbeknownst to Anne, arranged for her four-month-old daughter to be adopted without her consent. At seventeen, forced to give up her daughter and ostracized from her home, Anne boarded a ship from Scotland to Pittsburgh, Pennsylvania, alone and with little means to return back to her home of Scotland. Living in the city and working at Horn's department store downtown, she made the daily trek down Penn Ave in the independent quest to earn money to pay rent for the room she shared in the home of her aunt and uncle. Through a neighbor, Anne met artist Frank Staub and found happiness in a new love story that belonged all to her. The two married in 1956 and moved into a small apartment in East Liberty to continue building the life that would become her long-lasting legacy. A few years later, they celebrated the birth of their daughter Annette, and later, the birth of their son James. The family, along with their Great Danes of many names (but mostly “Heather”), lived in Forest Hills and later in Harrison City. In 1982, a missing piece of Anne’s heart was found when she was reunited with her first daughter, Anne, for the first time since their separation in Scotland nearly three decades earlier. After Frank's passing in 1989, Anne returned to her native Scotland. There, she remarried a childhood friend, Thomas Withers. Together, they traveled the world and holidayed in Spain yearly, danced to Frank Sinatra, and relaxed together every evening with a shared cigarette and nightcap until his death in 2018. Anne's story spans countries, oceans, loves, families, and heartbreaks, but her vitality and tenderness never wavered nor ceased. A fierce woman, Anne's resilience and strength live on through her family, who inherited her passionate Scottish spirit and unrelenting courage despite hardship. Anne, a proud Christian, strongly believed in the right to religious freedom along with a woman's right to have power over her own life, her own choices, and her own future. Her loyalty and courage were unparalleled and the magic of her wit and laughter will echo in the hearts of all who met her. An iridescent spirit, we will forever remember Anne as a fearless woman, wife, mother, aunt, grandmother, and great-grandmother who spoke her mind, loved her family without abandon, enjoyed saucy romance novels, and never inhaled when she smoked her cigarettes. Anne is preceded in death by her mother Mary, father James, husband Frank Staub, second husband Thomas Withers, brother Edward Gallacher, and infant brother James Gallacher, and son-in-law Ian Finch. She is survived by her sisters Catherine Stark and Margaret Quinn, daughter Anne Finch, daughter Annette Vacha and husband Jim Vacha, and son James Staub and wife Mimi Staub. She was a unique and wonderfully loving and fun grandmother to Morag and husband Vince Russo, Helen and husband Kevin Finch-Alexander, Darren and wife Jacqueline DeMario, Devin DeMario-Miko and husband Dave Miko, Ashley Catone and partner Dominic DeMarco, Chase Staub, Dustin Staub, and Allie Staub, along with step-grandchildren George Catone, Christian Catone, Josh Catone, Brandon Vacha and wife Candace Vacha. Many great-great-grandchildren called her Mawmaw, including Vince, Matthew, Christopher, Rihanna, Bodhi, Ryder, Giavonna, Logan, MacKenzie, Aurora, Mia, Luca, and Veda. Friends and family will be received Thursday November 19th from noon till time of blessing service at 2 p.m. at the William Snyder Funeral Home, 521 Main Street, Irwin, 724-863-1200. The family asks that all visitors wear a mask and socially distance while paying their respects. A celebration of Anne’s life will be scheduled at a later date when it is safe to laugh and love without reserve. In lieu of flowers, the family requests memorial donations are made in Anne's name to either the Alzheimer's Association: Greater Pennsylvania Chapter or Planned Parenthood of Western Pennsylvania. For online condolences please visit www.snyderfuneralservices.com.

Anne Staub-Withers, 84, passed away peacefully on November 15, 2020, at UPMC Mercy Hospital in Pittsburgh surrounded by her loving family, just in time to enjoy a vodka and coke for "cocktail hour" in Heaven. The great story of Anne's life... View Obituary & Service Information

The family of Anne Staub-Withers created this Life Tributes page to make it easy to share your memories.

Send flowers to the Staub-Withers family.